I’ve been binge-watching a 2010-11 TV show called ‘Life Unexpected.’ It is about a teenager who has bounced around the foster system for fifteen years. When she decides to file for emancipation from the state of Oregon, she needs the signatures of her birth parents. Her search, and the ensuing drama of their new and old relationships, formulates the entire show. Issues of teen pregnancy, parenting, trust, adoption, friendships, abandonment and responsibility are thoroughly portrayed through the characters’ perspectives. The series is amusing, light-hearted and completely unrealistic. As described by the CW, it is Juno meets Gilmore Girls.

Adoption, as dramatically depicted in Hollywood’s ‘Life Unexpected,’ is very realistically shared in “Together Again” by Laurie Stephens. It is a book that shows the love and support adoption provides for children and the parents as well. This book is written from the child’s perspective and shares the author’s spiritual journey to becoming a whole family.

Have you ever felt as though you have known someone forever when you actually just met? Or felt a connection with your child or spouse that has an effortless, timeless quality? Together Again: A Spiritual Adoption Story is the true story of such a soul connection between mother and daughter. Their story spans heaven and earth and thousands of miles as the two souls are reunited through the miracle of adoption. Their journey is spiritual as well as physical.

The beautiful illustrations in the book bring the journey from China to the US alive for little minds and large imaginations, and help to visually tell the story of adoption.

Laurie Stephens was born and raised in Toledo, Ohio, and then spent some time in Florida before settling 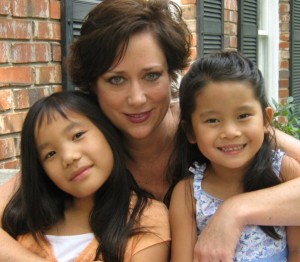 Laurie Stephens with her daughters.

into the Atlanta, Georgia, area in 1994. Laurie majored in communications at the University of Toledo where she was a member of Kappa Delta Sorority.

She is the mother of two incredible daughters, Lily and Avery, who were both adopted from China. Laurie has made a career in nonprofit fundraising and marketing. She also writes about adoption, spiritual issues, and life as a single mom in her 40s. Laurie’s work has been published in Adoption Today magazine. She also writes a blog.

The book is illustrated by Sharon Grey.

All books by BQB and WriteLife Publishing are available from Amazon, B&N and or can be ordered from your favorite local bookstore.

We have a new neighbor in the cul-de-sac. A rabbit. He’s cute, fuzzy and fast. Too fast to pose for a picture. We’ve been watching him for several weeks. He hides under the cars and zips from hiding spot to hiding spot. After the last snow, the kids built him a snow cave in our front yard. We’re not sure he went inside, but he did hop by to check it out.

And this morning, for the first time, we saw two rabbits. The kids were ecstatic. I was less so. Because you know what rabbits are famous for… {Insert your favorite teenage make-out song here} In a month we’ll probably have a rabbit parade happening. Or a rabbit preschool. Or a rabbit sold-out concert.

But the biggest reason is: they’re going to eat my garden this summer. I know it. Plant a row of seeds and it becomes an instant rabbit buffet line. I’ll have to spend massive time and effort researching rabbit proofing options. All the little vegetables we grow and pamper all spring and summer will be devoured by the cute (innocent looking) hoppers.

If you also love gardening, “Come Out to the Garden” is a sweet book about gardening, vegetables and family life. Especially those valuable relationships between grandparents and grandchildren. It is a rhyming picture book for children that would be best read with a bowl full of fresh picked sugar snap peas. Learn more about “Come Out to the Garden” written by Rick January and illustrated by his wife Stella January.

You can read reviews here.

But back to our soon-to-be pesky herd of rabbits. I think the best solution is a fox. A discreet fox. The kind who won’t leave blood trails in the snow for my children to see and for me to have to explain.

*** All books by BQB and WriteLife Publishing are available from Amazon, B&N or can be ordered from your favorite local bookstore. ***